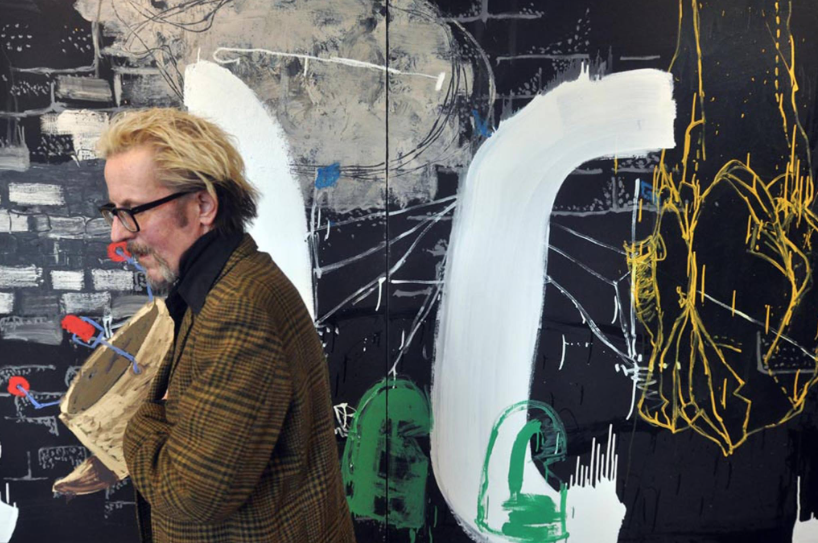 Joe (born George Joseph Boudreau, American, 1960) was an unusual child, insofar that he hid his near blindness until his family discovered it at the age of five. From that point on he became a ravenous artist, taking to multiple mediums and mastering shading and volume by nine. His creative drive lead him to leave home at 17 to study graphic design at the Pratt Institute in New York. He was influenced by the new street art around him in the early 1980’s, created by artists later recognized as Jean-Michelle Basquiat and Keith Haring. Ultimately Joe ended up at the Maryland Institute College of Art where he settled into his painting style. Baltimore was the city his first solo exhibitions were held.
The artist was in the restaurant industry in Ohio and Florida through his 20’s and 30’s, because it allotted him enough time to paint during the week. Joe settled into Chicago in the 1990’s, and was pleased to call it home until his passing. In the last decade of his life, Joe regained the prolific creative energy of his youth. More than 100 unique works were created, often times on a hot radiator box used as an easel in a friend’s tiny kitchen. It was not unusual to see the artist wrangle 6-foot canvases down the narrow stairwell of his apartment in Uptown. His work was boldly off-balanced and brilliant. Headless, striding figures in suits often “fell” from all corners of his compositions. He paired paint colors most artists would avoid, and the results were startlingly beautiful. An avid thrifter, Joe would bring home neglected paintings and photographs, painting over the scenes and into their frames. The results were surprisingly interesting. Joe used deep symbolism to work through a lifetime of memories; tents from his time of homelessness, images of his beloved dog Bruno, dark black shapes hinting at the pain his troubled organs gave him. He didn’t like to talk about his own work much, but he wasn’t afraid to lay himself bare on the canvas.
Joe’s unique compositions, featuring blocks of flat paints, heavy drips and unusual  subject matter is what drew people to his work, and ultimately to him. There aren’t  many of his collectors that didn’t develop a friendship with the artist. Gallery owners also took to his artwork. He had multiple shows in the city at Las Manos and Thomas Masters Galleries, and was represented by Interior Designer Michael Del Piero. His shows were well attended and the work flew off the walls. Joe also has more than a dozen large works on permanent display at the DePaul Arts and Letters Hall here in Chicago. The public can view the paintings there, Monday-Friday, 8am-11pm.
Posted by Joe Boudreau at 1:49 PM